Today, many people consider the fight for gay rights to be won – in the western world at least. Same sex couples have the right to marry, to adopt children, and to live together in society without stigma. However, it’s worth noting that these significant gains in gay rights are very recent, and do not represent the experience of gay people around the world. In 2001, The Netherlands was the first country to legalise same sex marriage, but as of 2020, only 28 (out of 194) other countries in the world have followed suit.

In many countries worldwide, gay people are still treated as second class citizens. In Russia, a constitutional ban on same sex marriage has been passed by referendum, a reflection of the hostile anti-LGBT environment in Russia as a whole. Even more extreme examples of anti-gay legislation exist in countries such as Nigeria, Uganda and Saudi Arabia, where being gay is a criminal offence, sometimes punishable by death. Even in countries we might consider more progressive, such as Japan, marriage between same sex individuals is still illegal.

Ireland endured generations of sexual and social repression under the Catholic Church until very recently. Following several years of prosperity, as well as an increase in globalisation, Ireland’s values have started to change and we have moved closer to a more equal society. However, equality and change didn’t happen without the courage, commitment and campaigning of many individuals and organisations. Homosexual activity was only decriminalised in 1993 and gay marriage was not recognised prior to the 2015 referendum.

In 2010 Ireland passed a civil partnership bill, pushed ahead by the tireless campaigning of the Gay and Lesbian Equality Network (GLEN). However, while civil partnerships were a step in the right direction they did not afford gay people the same equality as heterosexual couples either in law or, significantly, in our culture. For full equality in law and in society, Marriage Equality and the Irish Council for Civil Liberties (ICCL) joined GLEN to campaign for a public referendum on civil marriage equality. 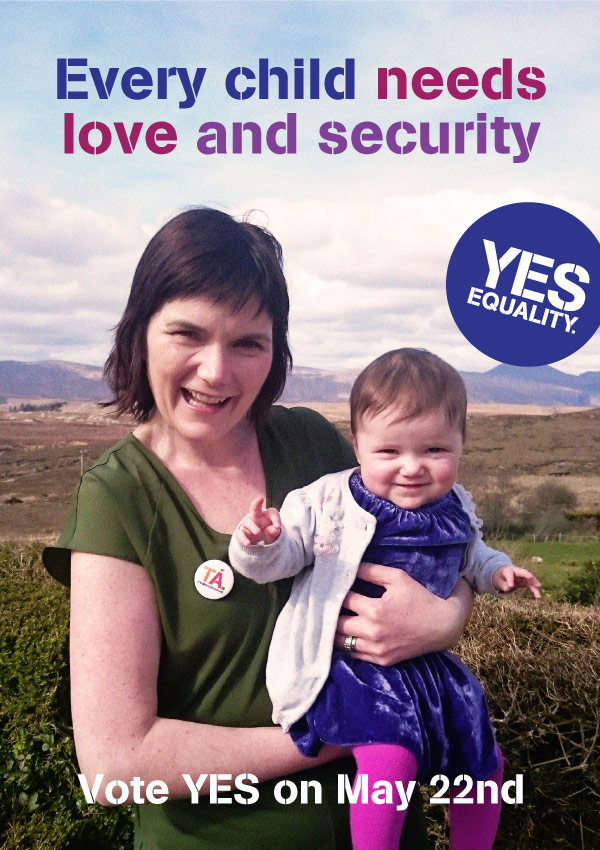 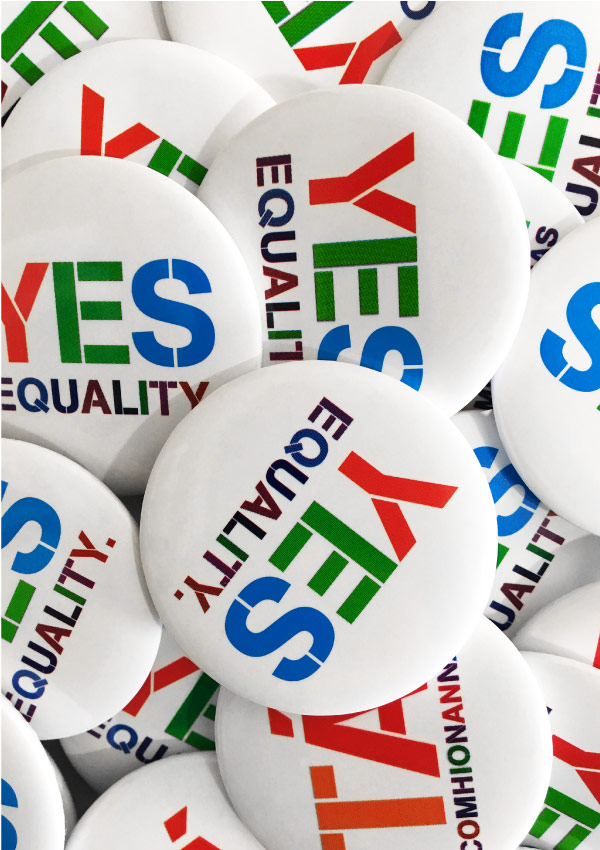 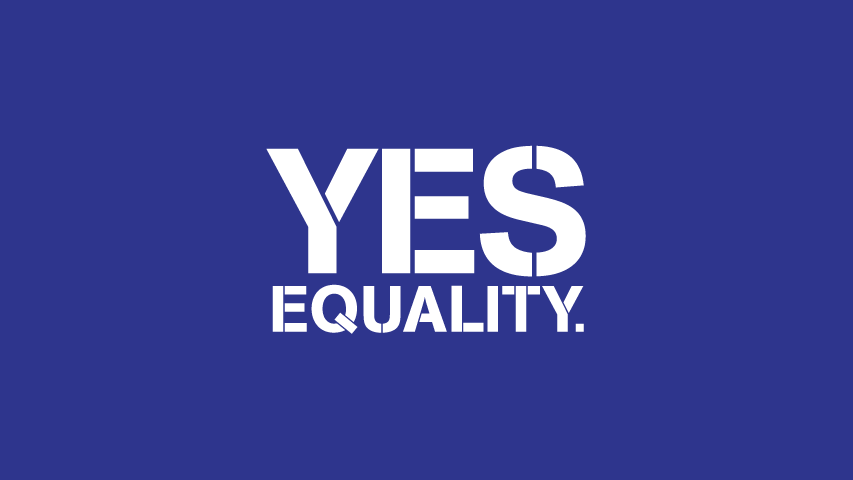 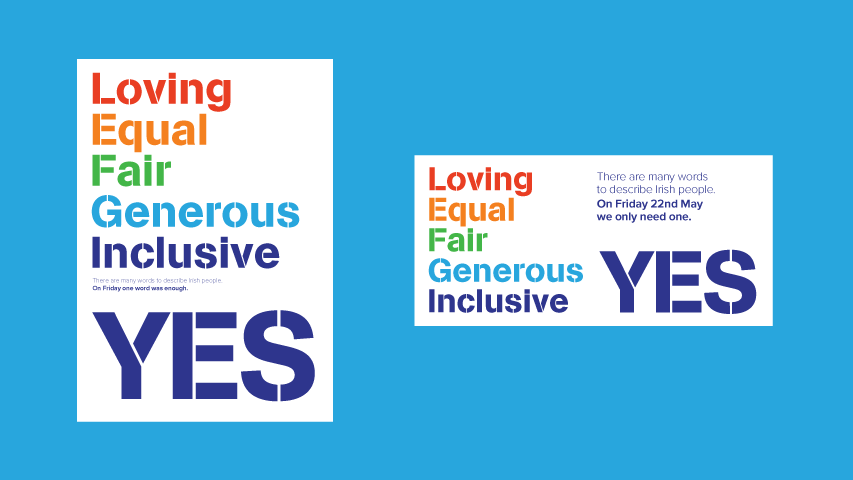 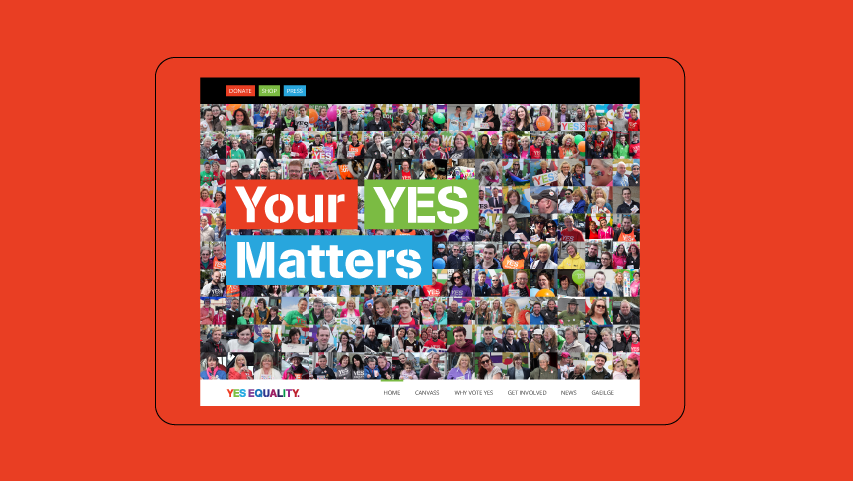 Based on qualitative research commissioned by GLEN, Language created a campaign strategy that recognised the place of marriage in Irish families. In Irish society, marriage is not only a marker of love and commitment in a relationship, but it is also a recognition of the importance of community, family and friends to that relationship. Marriage in Ireland is not an ‘institution’, it belongs to our culture and our values, to the people. Recognising lesbian and gay relationships as equal in our constitution would make marraige more fitting for the love, kindness and inclusiveness in Irish families.

The relevance of marriage equality reached beyond the rights of a minority. The lack of recognition of one of us is an injury to all of us. This campaign was about the Ireland people wanted – free of shame and repression.

This was a campaign of values as well as a matter of individual freedoms. In Ireland we had fought hard for our freedoms and values. Now was the time to shed the vestiges of our dark past, enable a new generation to engage politically and reshape our constitution.

These ideas were expressed in the name ‘YES EQUALITY’. This did not specifically identify the campaign as LGBT, but identified it as a call for Irish people to stand up for our collective values. ‘Yes to equality’ would be a statement every Irish person could respond to, and a principle every person would stand up and vote for.

‘At that moment the campaign identity that the three groups had been striving to visualise was born. There it was, as a badge that was to become iconic, in a typeface that was to be adopted and used all over the world. ‘Yes Equality’ looked and felt right. It did not identify the campaign as lesbian, or gay, or LGBT, but identified it as the collective values of Irish people. It would not be about ‘them’ lesbian and gay couples, isolated, apart from, not fully integrated with their broader families and communities. This campaign would create an identity in which everyone could see themselves and the values they would be happy to stand up and vote for.’

In order for the referendum to be a success, Marriage Equality, ICCL and GLEN would need to build Yes Equality into a national grassroots civil society campaign. This would activate the potential of local groups, organisations and individuals to influence others, and enable them to use their own voices to campaign for the change that mattered to them. The campaign ran in three phases:

This three-phased campaign resulted in a level of engagement and participation never seen before in a political campaign. Register to Vote was widely adopted by Student’s Unions, political parties and civil society organisations, in addition to the thousands of individual volunteers and canvassers. The voter registration campaign took off across social and traditional media, with celebrities such as Gay Byrne, Colin Farrell, Hozier and the Rubberbandits publicly pledging their support. In the later stages of the campaign it was the personal stories from families of lesbian and gay people that became the most significant part of the public narrative. 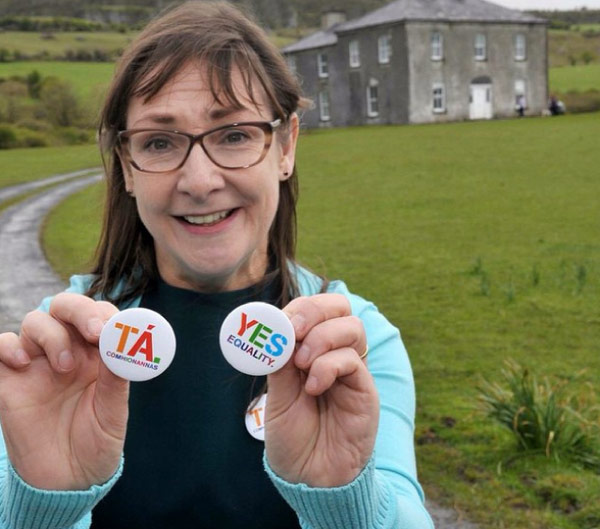 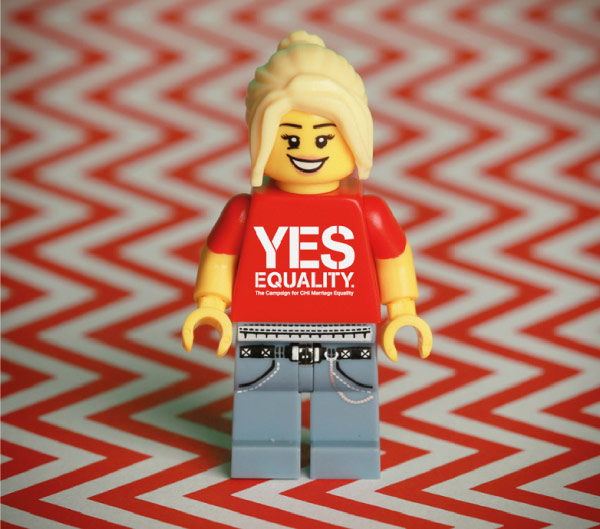 In 2015 Ireland became the first country in the world to legalise gay marriage by popular vote. The referendum passed with 62% of the vote and a majority in 43 of the 44 electoral constituencies in Ireland.

The referendum campaign transformed the political landscape in Ireland with a new generation of politically engaged young people participating in societal change. The campaign resulted in a record number of volunteer canvassers, young voters and general voter turnout. It was also Ireland’s most successful register to vote drive with over 20,000 new voters enrolled in advance of the public vote. As younger people are typically the demographic least likely to vote, their support for this referendum was considered instrumental to its success.

This proved to be a pivotal moment for Irish society, a moment when we all stood up for the values we believed in and the type of country we wanted to live in. The success of this referendum would also pave the way for the subsequent referendum in 2018 on abortion {link to case study}, and gave a new generation a sense of the power of values and votes in participative democracy.